by Matt Diggity | May 23 | SEO News: Recent Updates, Articles, and Trends in the Industry 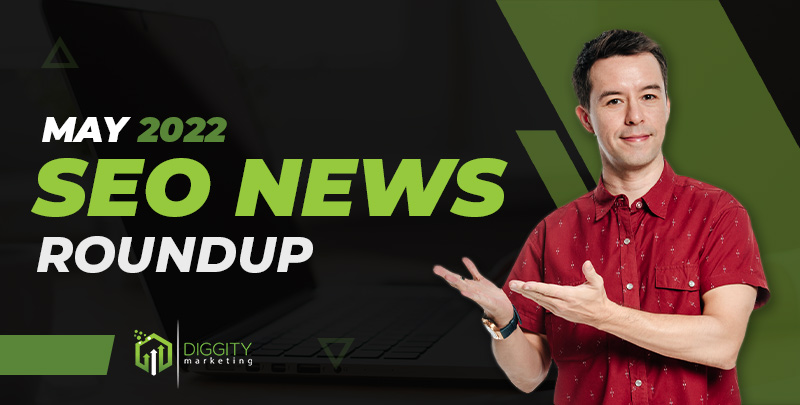 Do you need to make the most of your second quarter? Stay on top of the SEO world with this month’s roundup of guides, case studies, and news items that you shouldn’t miss.

First, you’ll pick up some new tricks from the month’s top guides. Some of SEO’s top minds will teach you how to build large amounts of backlinks quickly, and how to identify when your increased traffic is coming from spam.

Next, the case studies will give you the data you need to make better decisions. You’ll learn what the numbers can tell you about link rot, header changes, and SEO aggregation.

Finally, you’ll get the latest news. Discover why Google is getting discussed over their recent algorithm update, changes to featured snippets, visual search features, and a minor controversy over content.

Brian Dean from Backlinko has some advice on how you can manage an amazing feat—building more than 5000 backlinks in a month. You’ll be introduced to a link-building technique that Brian refers to as “Reverse Outreach”. 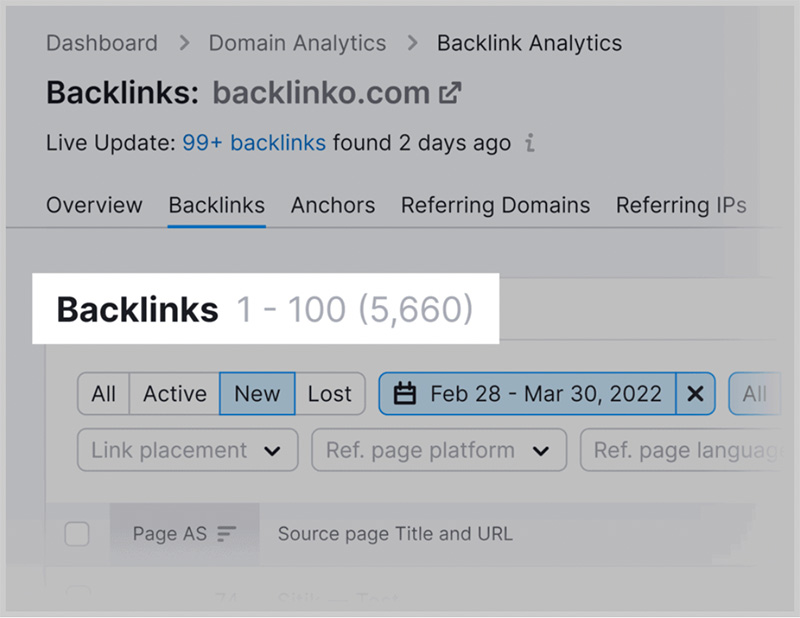 Brian claims it has significantly more potential to scale than other popular ways of attracting links, such as The Skyscraper technique. To pull it off, you’ll need to flip the script and build content that demands attention (and links) from authority sites.

First, you’ll learn how to find what Brian calls “journalist keywords”. You can identify these keywords by using the People Also Ask Google search feature. Topics heavily associated with data-collection-related keywords (for example, topics such as “how many people use X) can point to journalists trying to collect information.

Read the complete guide to discover how you can find journalist keywords, how you can build content that takes advantage of them, and where to get the data you need to say something worth quoting.

A better backlink strategy can net you a lot more traffic. However, not all traffic gains are proof of success, as you’ll learn in the next guide.

How To Identify Whether Your Increased Traffic Is Spam

Zoe Ashbridge of Moz has some ideas for how you can find out if a traffic spike is truly a cause for celebration. She’s devised a checklist that you can use to identify spammy traffic.

You’ll learn how the following easily-accessible Google Analytics metrics can prove the presence of spam traffic.

Throughout the guide, Zoe teaches you where to find these metrics, how to read them, and which readings suggest that you’re getting hit with spam.

She closes with some additional advice on how you can take action against spam traffic. You’ll learn when it’s appropriate to request disavow actions against backlinks, and a method for filtering spam traffic before it starts affecting your data.

That concludes the guides for this month, but the upcoming case studies have a lot more advice you can use.

At Least 66.5% Of Links To Sites In The Last 9 Years Are Dead (Ahrefs Study On Link Rot)

Patrick Stox brings you this case study on link rot. Link rot is a term that describes the tendency of links to stop working overtime. Your links may stop working for many reasons, both intentional and unintentional. 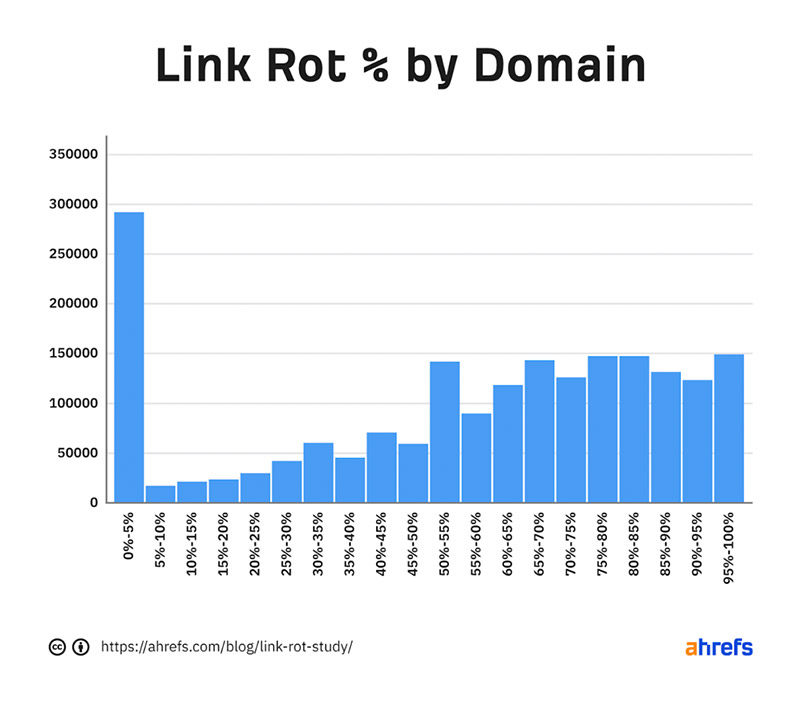 The study looks at more than 175 million different links tracked over nearly a decade. It has some insights that may improve your link-building planning over time.

You’ll learn why links rot. For example, the study shows that almost half of all links rotted because they were “dropped”. A link is considered dropped when it falls out of the index. This happens when the pages hosting your links can no longer be crawled or indexed, or when the domain itself no longer exists.

The full article lays out many other reasons your links can fail. You’ll discover why links can rot due to removal, crawl error, 301/302, and other causes.

Now that you’re armed with some new knowledge on link building, let’s look at a different side of SEO. The next study examines a small on-page change that can drive a lot of clicks.

Brian Moseley guides you through this split test that studies the impact of optimizing h3 titles. The study was performed on pages from a massive stock photo site. 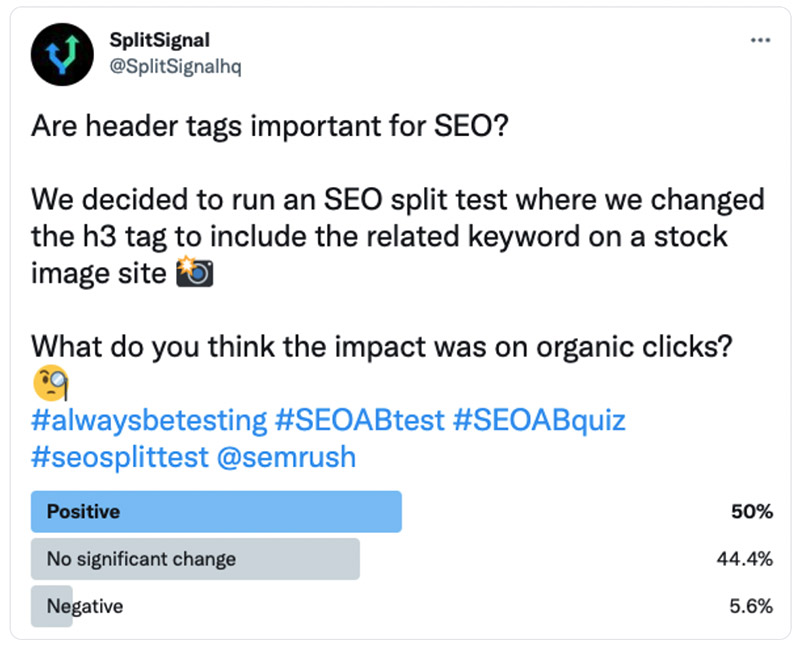 The SEMRush team hypothesized that changing the words (and intent) of a single generated h3 that appears across thousands of pages could increase the clicks driven to the test pages.

3,500 photo and image pages were selected and sorted into variant and control groups. The variant group had the h3 that pointed to additional searches changed from “related tags” to “related photo searches”.

The variant pages received 30% more clicks over the life of the study than the control group. While this exact change may not be relevant to many sites, it’s a good reminder that simple SEO fundamentals—even on lowly h3s—can still have a deep impact.

If you’re looking for some grander SEO ideas, the next case study has just what you need. It looks at how Uber Eats became an online juggernaut with SEO.

Kevin Indig brings you this detailed look at how Uber Eats surpassed the value of its parent service (Uber) by positioning itself as an SEO aggregator.

As Kevin reminds you, aggregators are sites that drive traffic with (often user-generated) inventory and details. For UberEats, the menu listings, pictures, and descriptions generated by the merchants they partnered with became a powerful traffic driver. 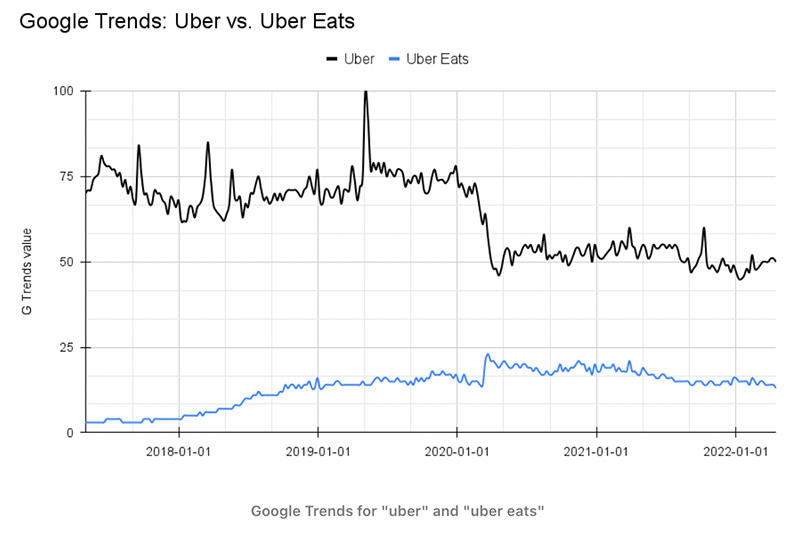 You’ll find out how the fledgling service was able to use content marketing and other strategies to cover a huge range of keywords. They could easily generate content like “best [type of food] near [city]” and simply link to their top-reviewed merchants for that region.

Merchants also filled their UberEats pages with as much content as possible to drive delivery orders. UberEats was able to rank in many areas just on the power of the merchant-provided content.

Check out the full case study to learn more about how UberEats mastered being an aggregator, and how their war with services like Doordash is playing out in the smallest SEO details.

That covers our case studies for the month. Next, you’ll get the month’s biggest headlines, starting with a look at the latest algorithm update.

Barry Schwartz brings you this quick look at a Google Update that rolled out near the end of April. Tracking tools such as SEMRush, RankRanger, and MozCast detected high volatility from the point the update began on the 20th, and continued through the 21st. 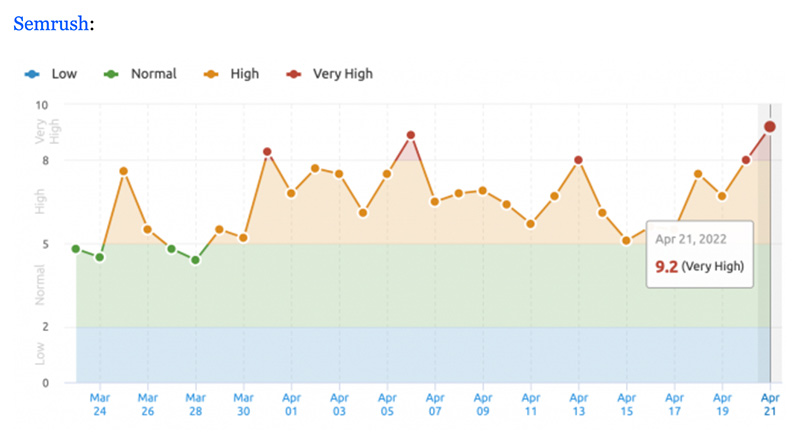 You’ll find some speculation that this is a continuing part of the March Product review update that ended officially on April 11th. Google may be still working on finetuning that large set of changes.

Whatever Google is doing, they are not ready to announce it. They still have not confirmed the update or offered any details of what it might be about.

Google has been more forthcoming about some of the other big changes and updates this month. Next, you’ll find out what’s coming for featured snippets.

Danny Goodwin brings you this look at two new featured snippets that are now appearing in a limited number of SERPs. The new snippets are “From the Web” and “Other Sites Say”

“From the Web” snippets appear to feature links and websites from up to 3 other websites. It seems to be used in cases where there are differences of opinion, and Google wants to avoid appearing to endorse one opinion.

For example, this snippet appears at the top of searches for reviews. The chosen snippet is given a paragraph, and in the new “From the Web” snippet section, competing voices are given a sentence. 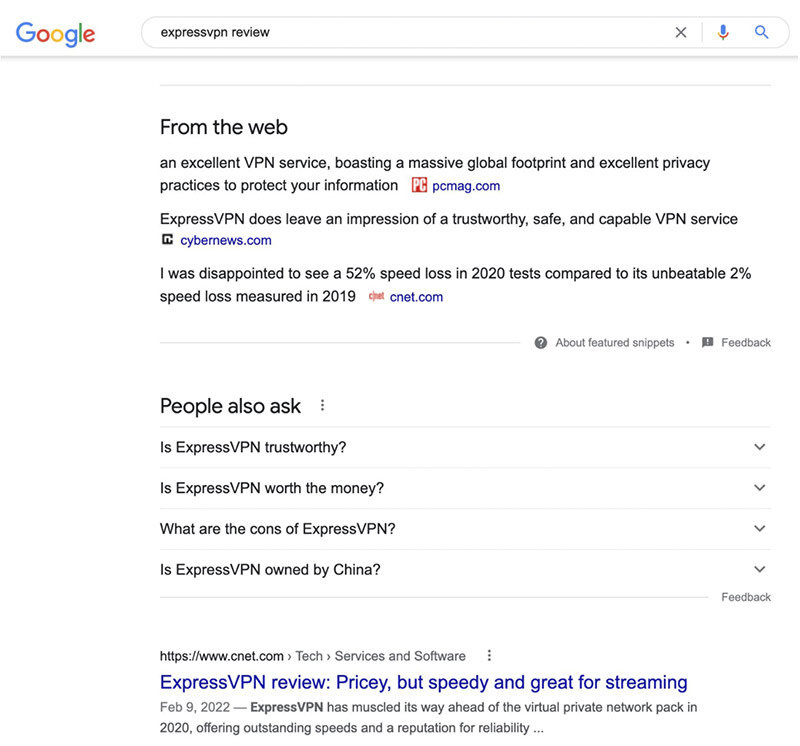 “Other Sites Say” snippets seem to appear in searches for factual information, and serve to provide additional facts that may not appear in other results.

For example, this snippet appears on top of searches for “benefits of carrots”. The main snippet discusses cholesterol benefits, while the “Other Sites Say” snippets provide additional links dealing with blood sugar control and hypertension. 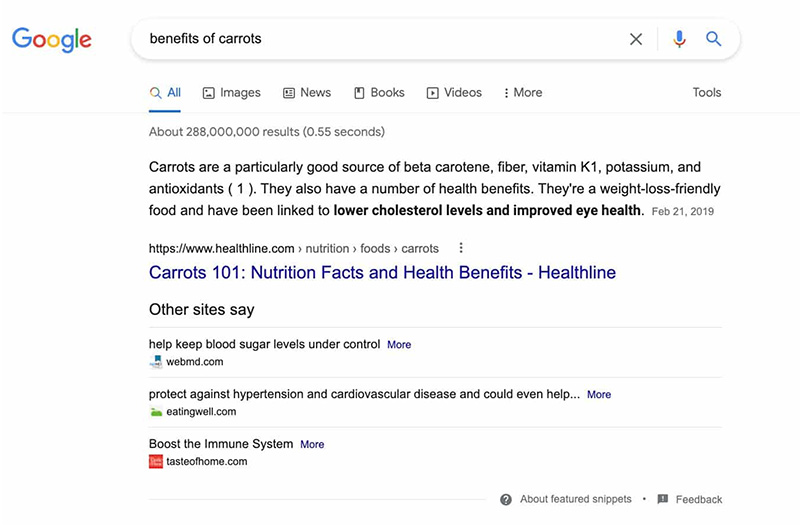 These features offer additional opportunities for you to claim snippets even if there’s already one in place. Next, you’ll learn how Google offers you an entirely new way to search.

Sean Hollister brings you this look at a new beta search feature in the US that may someday have serious implications for SEO. The new feature lets you drag a picture into a search bar, and then apply notes that find similar items according to your keywords.

For example, imagine you find some shoes you like, but they’re in the wrong color. Using this feature, you can take a picture of the existing shoe, and add the search “in red”. This search will return shoes that look like your picture but are in your preferred color.

It has already moved far beyond fashion. In another example provided for you, the search was able to return relevant guides when broken items were pictured with the terms “how to fix”.

Google hasn’t only made the news for new features. For our last news item of the month, we’ll look at a minor SEO controversy and how Google was ultimately vindicated.

Thread: Google Is “Inspired” By A Small Business Website

Gianluca Fiorelli caught the attention of many SEOs when he spotted a serious problem—Google’s knowledge panel appeared to be lifting content directly from Italian websites and copying it without any sourcing.

He was able to produce plenty of examples of this happening to business pages all over Italy. He ended his thread with a call out for an answer. 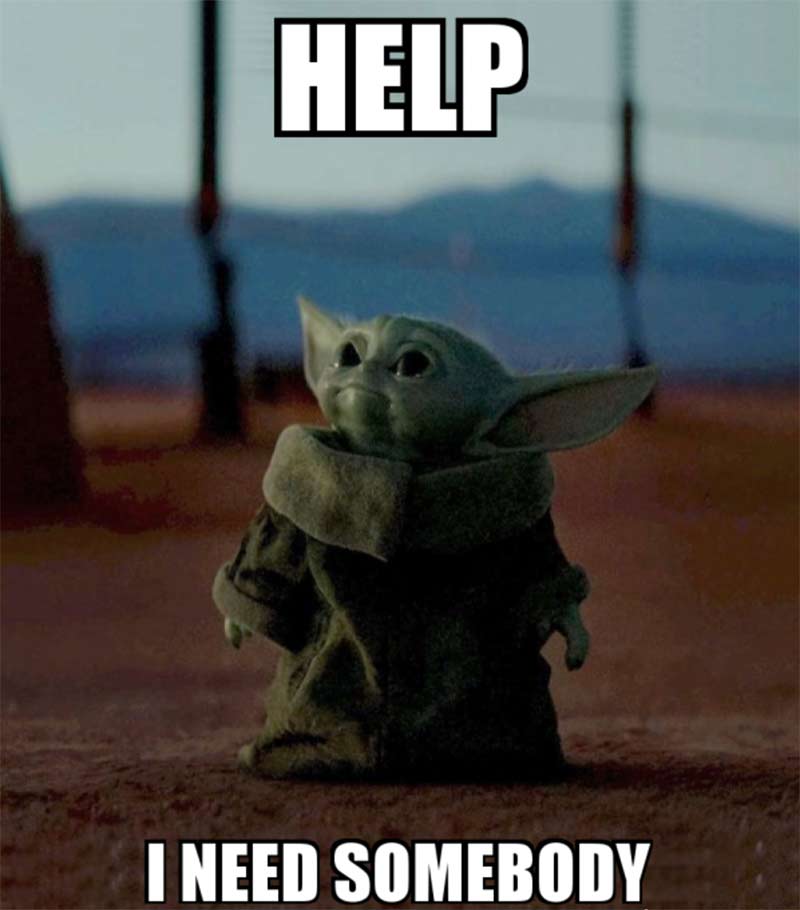 According to Danny Sullivan in his response, these answers were not lifted at all. In fact, he claimed, it was the small sites that had taken the descriptions from Google. He took the opportunity to clarify further that some descriptions are built by humans at Google, and should not be assumed to be generated.

Not all SEOs in the thread were satisfied, but in at least one case, Danny was able to show that a Google description had been taken by a site.

That completes the news items for this month, and the roundup with it. Check back next month for more of the latest guides, studies, and news.