How to Properly Use Expired Domains as PBNs (SEO Case Study) Just kidding.  This isn’t one of those posts.

But PBNs may actually be dead if you don’t know how to use them correctly.

Have you noticed in the past year or two that expired domains aren’t packing the punch that they used to?

Well, I have news for you.

They actually are just as powerful as they’ve always been.  You’ve just been using them wrong.

I perform a lot of testing and a good portion of these tests revolve around PBNs.

Some of these test results give me an unfair competitive advantage and I don’t easily reveal them to the public.

You’re about to learn one of my best kept secrets regarding how to properly use expired domains for PBNs.

A Bit of Background

For a few years, I had focused on auction and backorder domains for my PBN network.

Auction domains can be acquired on typical auction platforms (like GoDaddy Auctions or other Godaddy alternatives) where you would bid against others for a domain that the owner has voluntarily put up for sale.

Backorders involve a similar auction process, but instead you’re bidding on a domain that is about to drop from someone’s account.

Maybe the previous owner forgot to pay their bill.  Or maybe they’ve abandoned a particular business and no longer require the domain.

Auction and backorders don’t have a drop history and are thus desirable because they theoretically carry less of this PBN characteristic.

Ever since PBNs started to become a popular ranking tool, prices have risen on auction and backorder domains.

But in the last year especially, prices started to skyrocket as people were willing to pay more and more for auction and backorder domains.

This price increase prompted me to start exploring the realm of expired domains early last year.

Expired domains are essentially domains that have dropped completely.

The owner let them go no one picked them up in the backorder process.

So for a period of time, they were orphans with no one to love them. 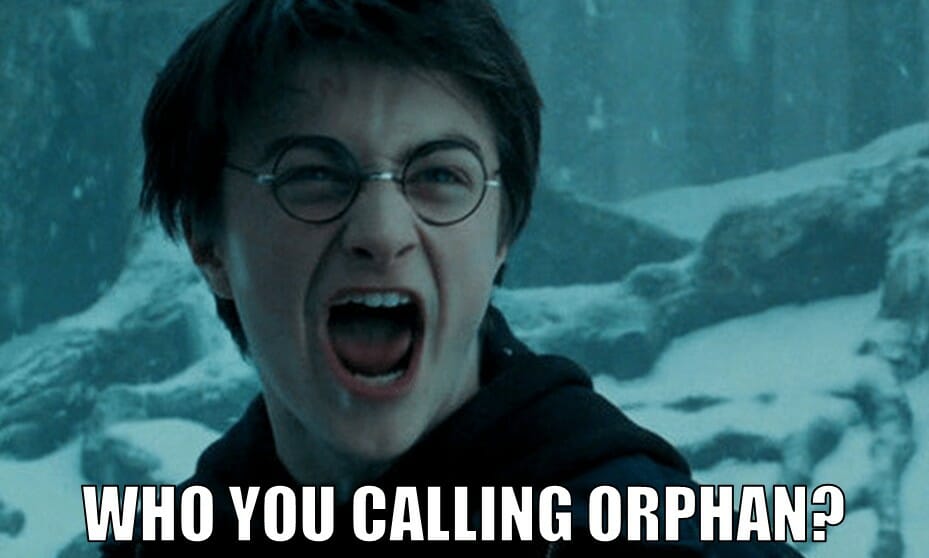 While the rising costs of auction and backorder domains prompted me to start exploring expired domains, I didn’t jump straight in.

As any super-paranoid SEO geek, I had to test them out to make sure I knew how to use them properly.

With all this hearsay about expired domains not working like they used to, I suspected there was more to the story.

In order to properly test expired domains as PBNs, I wanted to mimic how the rest of the SEO community was using them.

A huge majority of grey hat SEOs are using expired domains as their main source of PBNs (see poll below).  After interviewing many of them, I set out to emulate their practices.

I sourced expired domains that (in their former lives) had represented a broad selection of niches. 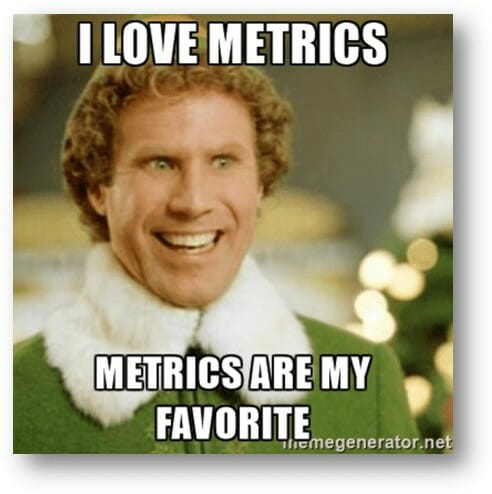 I wanted to get a good spread of domains that covered the metrics that most SEOs have access to so I gathered expired domains with the following metrics:

In order to test whether or not these PBNs are doing their job, I would send links to test sites and monitor the ranking increases (or decreases).

For example, I often use target test sites like this…

JohnAndBonnieJackson.com (fictional) might have been a wedding registry page in 2014 and hasn’t received links in years.  It ranks for “john and bonnie wedding registry” on page 3, but I require that it had never received anchor text with any of these words in it: “john”, “bonnie”, “wedding” nor “registry”.

At this point, I think we can all agree that if we were to send an exact match “John and Bonnie wedding registry” to this healthy domain, we are definitely going to see a ranking increase.

That is… if the PBN is good.

This entire process is outlined in my PBN testing methodology.

Experiment 1: The First Links are Placed

For the first test, I did exactly what a majority of the SEO industry does with their PBNs…

Here are the results: 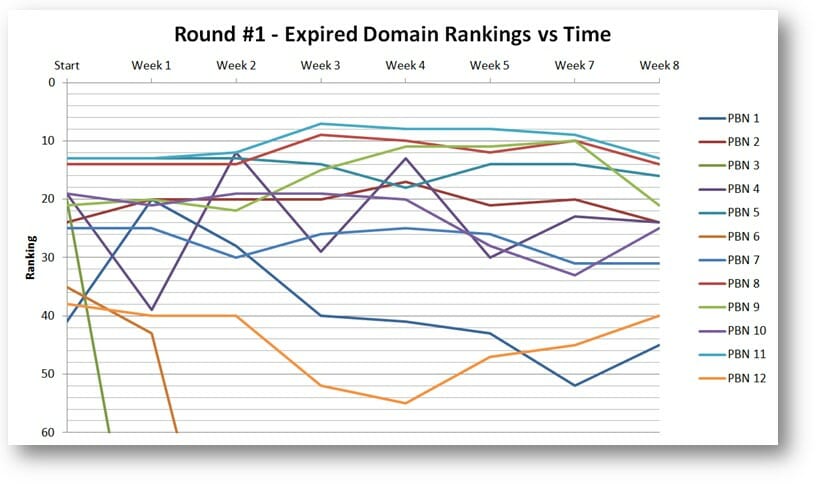 The nuances are hard to see, so let’s look at the raw data.  I’ve gone ahead colored the data, making it easy to interpret.

I’ll redraw the graph with the same coloration so you can clearly see the damage that was caused. 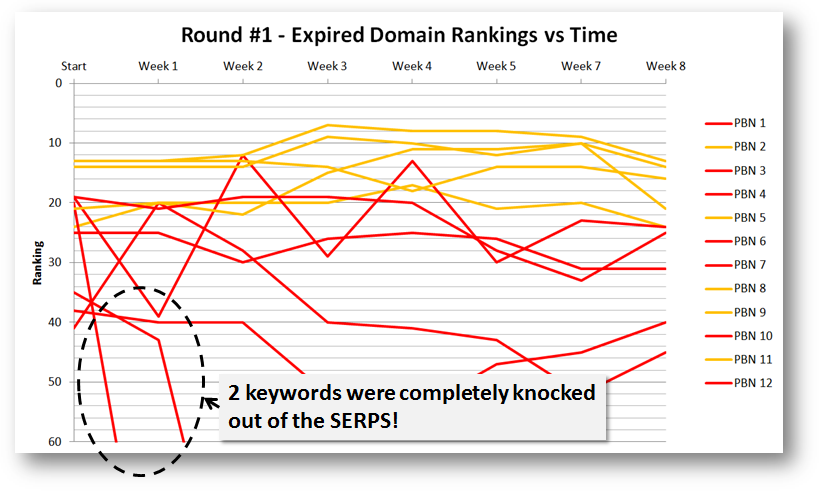 Somehow, by using these PBNs exactly as intended, they’ve turned out to be negative assets.  These expired domains were essentially SEO liabilities.

At this point it became no surprise to me why the industry was claiming that expired domains were useless.

But at the same time, I had a strong hunch about what was going on…

Going with my hunch, I wanted to run another test.

First I removed the links that were going to the first set of target test sites.

Then, I identified 12 more target test sites and simply sent them same PBNs to these new sites.

Here are the results, which started showing in just three weeks this time: 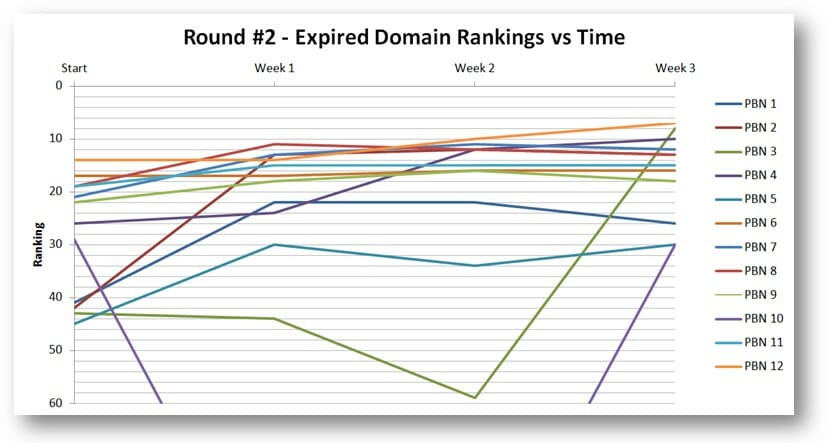 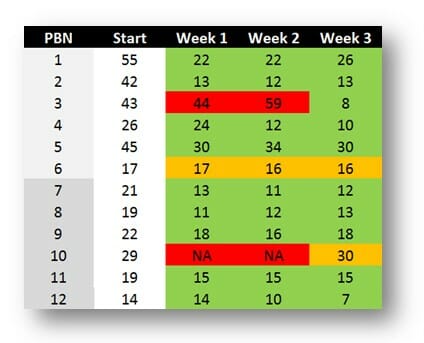 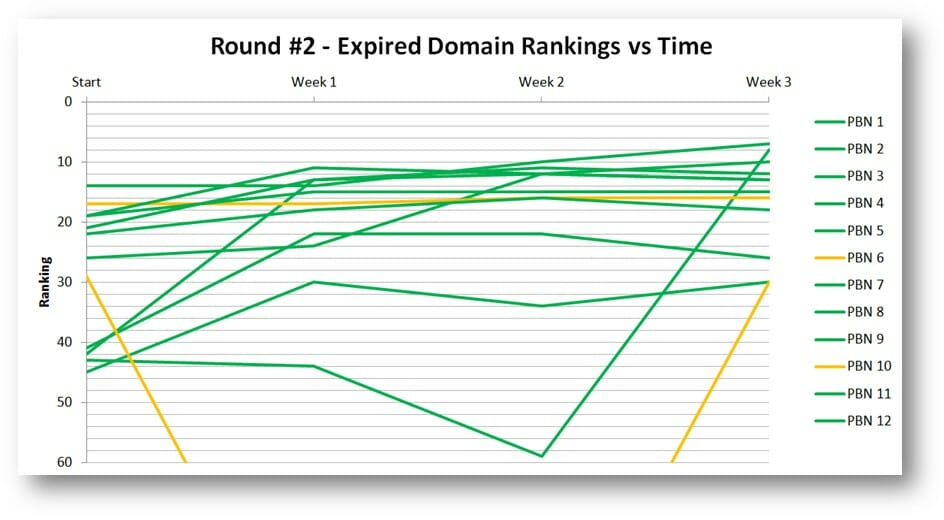 These same PBNs, which were previously liabilities, have just turned around and created huge ranking increases in another test round.  “PBN 3” brought a keyword from #43 to #8!

Someone explain what the heck is going on!

Analysis: There is a filter on expired domains used to weed out SEOs

Here is the key fact in understanding what has happened…

In Experiment 1, I setup the PBNs and linked out from them either the same day, or sometimes as long as a week.

With Experiment 2, nothing was changed except there was more time between when the expired domain was indexed and linked out from.

There is an algorithmic filter that will cause expired domains to cause penalties when linked from too soon after indexing.

But after a certain time threshold has passed, expired domains work perfectly fine.

What is that threshold?

The shortest data point that I’ve uncovered (so far) is 36 days.

You must wait at least 36 days between the time you index an expired domain and link out from it.

This whole time, the algo has exhibited a filter..

Is it specifically meant to target grey hat SEOs?

Perhaps yes and perhaps no.

Either way, the effect is felt.  It manages to severely hurt grey hat SEOs by disrupting a common usage model.

I have a confession.

I’ve known this for at least a year.

Some things you need to keep to yourself simply because of the competitive advantage they offer.

As it turns out, expired domains still work very well.  You just need to know how to use them properly.

Is this filter still in place?  You betcha.  Feel free to test it yourself.

Although, these days I see more variability on the threshold.  Often I see domains become assets in less than 36 days.

My next hunch is that they might apply this same threshold to auction and backorders, and you can count on the fact that I’m currently running tests to catch it as soon as it’s in play.

Will I release the results to this study and other critical studies like this?

Be sure to subscribe to be kept in the loop. 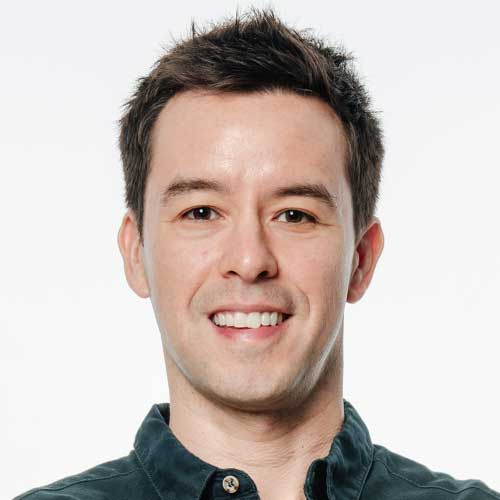